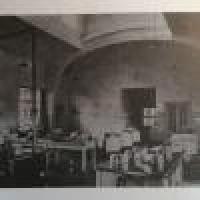 The Central Library of the Faculty of Agriculture was established in 1954 and was housed in the premises of Via Pietro Giuria 15, in Turin until its transfer to Grugliasco.
The Central Library of the Faculty of Veterinary Medicine was established in the academic year 1948-1949 order of the then Professor Giovanni Bisbocci and was hosted in the building of Via Nizza 52 in Turin, up to the moment of its transfer to Grugliasco.

The building, home to the Library, was built between 1931 and 1935 as a kitchen in the central area of ​​the Psychiatric Hospital of Grugliasco, adopting a building type very similar to that of the "Ville Regina Margherita" in Collegno: a series of buildings, born in the same period, for "boarders" or patients able to pay a fee to enjoy a better hotel-type service.
For this reason it received the nickname, which it still maintains today, of "Alberghetto".

The recovery of the building has ensured the regulation and functionality of the spaces, while maintaining the original morphological characteristics of the 1930s (as indeed imposed by the constraint of the Superintendency). The small chimney still remains from the former kitchen of the refectory.

The Interdepartmental Library of Agricultural and Veterinary Sciences was inaugurated on November 14, 2003 and represents a single documentation center which the entire scientific community of professors, researchers and students currently present on the Grugliasco campus belongs to.
The structure has a total area of ​​960 square meters. The ground floor (530 square meters) includes offices, reading room and newspaper libraries. This part can accommodate up to 100 users.
The remaining part is in the basement, where the book deposit is located, equipped with compact shelving. The total number of volumes amounts to approximately 60.000, to which must be added the graduation theses, which are stored on digital support.
The services offered range from the consultation of bibliographic material and journals (displayed in open shelves), to photocopies, to the loan of monographic material (with the exception of general reference works and degree theses) and inter-library (localization and retrieval of books not owned by the library), to document delivery (localization and retrieval of bibliographic material not owned by the library).

Source of the photo: Institute for the mentally ill in Grugliasco (Turin), Turin, Administration of the Province of Turin, 1955